Members of the Our Farm Heritage project headed out into the Upper Nidderdale landscape with Graham Arkley, a student from the School of Archaeological Sciences, University of Bradford. 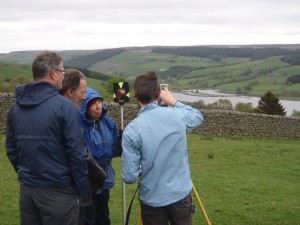 Graham teaching the team about the total station

Graham is carrying out research here in Upper Nidderdale as part of his Masters degree. His research is twofold; he is keen to gauge awareness of geophysical survey techniques among community archaeology groups, particularly ground penetrating radar (GPR) and electrical resistance tomography (ERT), whilst also investigating slope correction of the results of the two techniques. 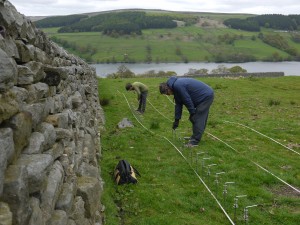 Laying out the probes for the first ERT transect

The team are carrying out walk-over surveys of farm holdings across Upper Nidderdale, recording a wide variety of archaeological features. Here, they led Graham to an area with an interesting platform with associated features that appear to run underneath the current field wall. The team gained first-hand experience of laying out the survey area across the feature, using a total station to locate the survey area, as well as using the geophysics equipment.

Those that joined Graham found the experience fascinating and were surprised at the amount, not to mention weight, of the equipment.

Graham is now working on the results and the team look forward to hearing about the findings later in the year.

Ground penetrating radar – A radar signal is sent into the ground. Subsurface features reflect this signal which is picked up by a receiver. The time taken for the signal to be reflected indicates feature depth.

Welcome to our news updates

Find out the latest from the Landscape Partnership. You can search, view our archive or select via specific topics.