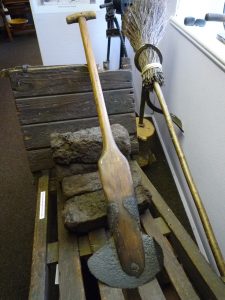 Peat or turf sods have been cut or sliced for centuries on the moors. A product of decayed vegetation found in boggy moorland, peat was the only fuel for many people in the dale. Farms far from public roads were dependent upon it, as they either never saw the poor quality coal of Nidderdale or could not afford it, and they relied simply on peat for heat and for cooking. The fires in their cottages or farmhouses were kept constantly alight, smouldering with two or three peats placed within the kitchen range and never allowed to go out. At night a really dry lighter peat was preferred, and just a few big peats were placed flat on top of the fire to burn slowly and safely. Then from the remaining embers, the following morning’s fire was rekindled.

This local spade, in the typical Nidderdale design, is approximately 1.5m in length, and it has a specially shaped wooden handle. There is a metal cutting edge at the bottom, 25cm wide with a 10cm wing to one side to facilitate cutting two edges of a sod.