We started lambing on the 17th March with the first three flocks of sheep. These were the Masham ewes which are in lamb to the Texel tups (these are for fat lambs). The other flocks are Dalesbred ewes in lamb to the Blue Faced Leicester which produce Dales mules, and in lamb to Teeswater which produce Mashams. Both of these are bred for gimmers and the tup lambs are sold as fat lambs. In addition to these we had a few insider ewes in lamb to the Blue Faced Leicester which were due. The other ewes that are in lamb to Dalesbred, and will produce purebred lambs aren’t due until 11th April so we still have another month of lambing to go. 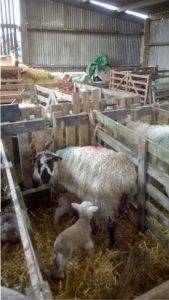 Usually, we lamb all the ewes outside as we don’t have enough shed space to fetch all the sheep inside to lamb. We did have to bring some in a few years ago as it was snowing, but it did seem more work as every sheep had to be handled whereas when they are outside the lambs only have to be checked on and the ewe normally doesn’t have to be touched. That year, we found that the ones that were outside didn’t get as much attention as they normally would as more time had to be spent inside. The most time consuming job of lambing inside is taking all of the sheep and lambs back to the field. Up to now I am pleased we don’t lamb inside as things are going well really considering how wet it has been. That’s not to say that everything has run smoothly!

Unfortunately, there are always problems at the start, such as a ewe having a dead lamb or ewes with triplets, which typically don’t have enough milk.  Triplets can’t be left on ewes up here as there isn’t enough grass for them to produce sufficient milk, and a sheep has two teats so it makes better sense for her to have two lambs. With triplets, one of the three usually has to be mothered on by another ewe, one expecting single lamb or one expecting twins which has lost a lamb.

Our first triplet ewe lambed fine, she had all three alive which was good, but a twin ewe had two dead lambs so one of the triplets was mothered onto the twin which had no lambs. We do this by putting them into lamb adopters; these hold the ewes head so that she cannot butt the lambs that you are trying to mother on. 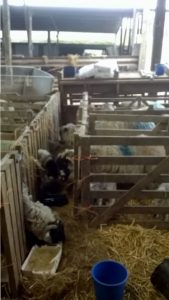 After two days I let the sheep go with my dog Fly. The ewe becomes mesmerised by the dog and forgets that the lambs aren’t her own. It doesn’t always work, but it seems to be working up to now. The lamb adopters are also used when the ewe decides she doesn’t want her own lambs and usually it encourages the ewe to accept her lambs, and after two days of being in the shed, they can usually go out as normal. This year the triplets have done really well.  Out of all the triplets, we only have two sheep with the three lambs left on them. Fly must be doing a good job of bewitching the mothers!

When the lambs are born even if they are outside they have iodine put onto their navels as this helps prevent infection. If the lamb is a twin, both of the lambs will have a number sprayed on their side and their navel’s iodined. We only put numbers on the twins as they are more likely to get mis- mothered and having both the lambs numbered makes it easier to find the lamb’s mother since normally the ewe has one of the lambs with her. The lambs that have been inside are marked as well even if they are just singles because sometimes they get mis-mothered too, as they aren’t used to mothering up with other sheep around.