Well, we have finally finished clipping with only a few left that have missed the shearing clippers. We normally try to finish clipping all of the sheep before August but we didn’t quite manage the deadline this year. This is because earlier in the clipping months all the horned sheep had wool that was too tight to clip when we had some days spare, so we had to leave them a while until the wool had enough rise. Rise is when the wool has separated from the ewe’s skin, making it easier to clip. So, the last few weeks when we had a chance to clip the sheep, they were so much easier to do. We finished clipping on the 2nd August, which wasn’t too bad and it’s a nice feeling when you bring the last herd of sheep into the shed to clip. My Dad, brother and I were happy to have finished. Since we have finished clipping all the wool is now to be sold. We don’t get much money for the wool, and the prices vary from each year, so we don’t know how much we’ll get yet. 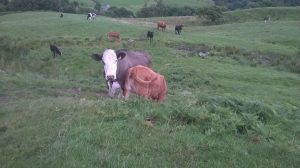 Meanwhile, we have been tidying the fields up by ‘topping’ them to cut all of the thistles and nettles. We have to do this because some of the fields are in environmental schemes, so they cannot be sprayed with herbicide, with weeds spot sprayed only. They can’t be sprayed because there are some wild flowers and plants that are good for the environment and need to be preserved. These fields also cannot have much fertilizer on, because Natural England pays us to keep them as traditionally managed fields. Sometimes at this time of year we wonder whether it is the right thing to do, as they look untidy until we can get the thistles and nettles removed. My brother has been doing this with the tractor and a machine called a ‘topper’, which cuts the thistles and nettles, and I have been going round cutting the ones that you cannot get to with the tractor. It is a change cutting thistles down rather than sitting on a tractor all day. Once you have done it, it feels great as the fields look a lot tidier. My brother says I do a better job by hand then he does with the tractor and topper. But the only thing is that we fenced the river off for catchment sensitive farming, to help with erosion and improve water quality, but it has encouraged more plants such as ragwort, thistles and the invasive weed Himalayan Balsam into the fields. I’m not sure whether the fencing was a good idea because it has created more unwanted growth and it will spread all the way down the river making all the riverside a mess. Himalayan balsam is very difficult to get rid of – the only way to stop it from seeding is to pull it out. It is easy to pull out but it is a very time consuming job, although a job that has to be done.