Last week we have been busy PD-ing (pregnancy diagnosing) the heifers and cows to find out which are in calf and which aren’t. We don’t always PD all the cows, but this year everyone thought that is was the better to do them all as it costs a lot to keep a cow that isn’t producing a calf. If they are geld they are sold at the auction as a cull cow. Another reason why we are doing this is because we still haven’t received some of our Basic Payment Scheme money from December 2015 and 2016 that is due in December. Whether we get it is another thing, so we are trying to reduce our costs and have a selling session to get a bit of extra money. 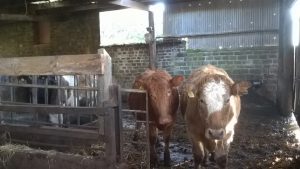 We started with the cows that are at the other farm. These cows were with the bull inside in the spring, before they went outside. The bull wasn’t with them through the summer so if anything wasn’t in calf by then they would have to go. Most of the cows were in calf, but there were three that weren’t. My Grandad said that one wasn’t in calf as it had been multi suckling (when it lets other calves suck, that aren’t its own). Multi suckling can be a problem as it is how diseases can be passed around, and if there are a few sucking the cow then they pull them down, which is what happened to one of the cows. Another of the geld cows was mad, she tries to jump out of anywhere when we go to move her, so she was best going down the road. 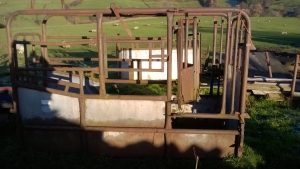 To hold the cows so the vet can scan them, we put them into a cattle crush that holds them by their necks and stops them pulling their head back. This is the safest way to handle them as they don’t stand still and let you PD them. Most of them behaved and didn’t get out, but one did and she is always very uneasy when we try to handle her – she must have a smaller head!

It was the heifers turn after the cows had been done. This was a really anxious moment for me, as these hadn’t been run with the bull – they were the heifers that I had AI’d in the spring so I was expecting some to be geld. It turned out to be great news. Almost all the heifers that I had served had held. The vet was very impressed with such a good result. And my Grandad and Dad couldn’t believe it.