It’s back to that time of year again when we are working with sheep and lambs most days when we have the chance. We have been spaining the Masham ewes and the Dalesbred ewes with the mule and Masham lambs. ‘Spaining’ just means separating the ewes from their lambs when the lambs reach a certain age. We started spaining a week ago and spained the Masham ewes. We split the ewes and lambs up by running them up a race, then separating them by using a gate which leads the ewes into one area and the lambs into another. It works well and we soon have them separated. 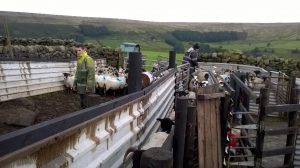 It was a hectic Sunday morning, as we had over 400 lambs to spain from the Masham herd and then we had to be at the auction mart with the best lambs – all before lunchtime. We sorted the biggest, fattest lambs from the rest of the herd of lambs, and took them to the auction to the collection. The lambs are weighed as soon as they get to the auction and there is a set price so we know how much we are going to get for the lambs before we take them. We find this is a better way than taking them to a fat stock sale at a different auction where there is no guaranteed price – plus the fat stock auctions are further away. All the fat lambs are electronically tagged with a single tag before they leave the farm. Also, there is a form to fill in before any sheep leave the holding space at the auction so they can be traced back to where they came from. Each farm is called a holding and has a holding number to identify it.

This weekend, we also spained the Dalesbred ewes. We used the same method to split them up with the gate to separate them. We had to separate more sheep to take to slaughter than usual this year, as we have had to take the sheep off one of the moors. This is because the shooters – who are allocated to looking after the moors – think that there is no need to have sheep on the moors anymore. But I am not sure that this is a good idea, as sheep and grouse have worked together in the past and sheep help the grouse with ticks, so it was a difficult day taking the sheep off the moor. My dad, my brother and myself sorted out 180 ewes on Saturday to go to the collection on Sunday. This is more of a time consuming job than taking fat lambs as sorting the tags out for the ewes is slightly more complicated. The ewes have to have two tags, one manual and one electronic. If one tag is missing, the other needs to be removed and two new ones put in. Once this is done we have to write down the old tag and the new tag number in the holding register, so that there is a record of which sheep have been re-tagged. Also, as they are electronic tags we read them before we sell them so we have a record of the sheep which have been sold. As these are old ewes, some of the tags may no longer read, so we have to read them manually.