Well, Saturday was a very different day to what we all imagined it to be. My first heifer that I had AI’d was starting to calve. I went to check on her at 7 o’clock in the morning and she wasn’t really doing anything, so we left her a few hours before we decided to have another look in. My Dad had a feel to see what the calf was doing and it wasn’t presented right, which was why she wasn’t making any progress. So he tried to get the calf to the right position and then to get it out using the calving aid. Unfortunately it didn’t even try to come with a bit of pressure on, so there was something wrong. So after over an hour of getting nowhere we had to call the vet. Whilst we were trying to get the calf out there seemed to be no life, which is why we tried so hard ourselves because there was nothing moving inside her so we only had the heifer herself to worry about.

As it was Saturday lunch time when we rang the vets it was out of hours which sometimes means it takes longer for the vets to come. But we rang them at 12 o’clock and the vet Rosie came just half an hour later. Once she arrived she soon got the calf into the right position and then we tried to pull it again with the calving aid, but it didn’t even try to come. So we knew then that the calf was dead and we just had to get it out to save the cow. The only thing left to do was a caesarean as the calf was unable to come out of the back of the cow.

The next job was to go and get some warm water and to ring the vets as they are meant to have two vets for a caesarean. However as they were unable to get another vet we had to carry on as there were plenty of us and there was only the heifers life to worry about. So we got on with it – the biggest job was clipping the hair off and cleaning her up. One of the things is jabbing the cow with anaesthetic to numb her, which looks a bit gruesome as it is a very long needle for where they have to give it. Once that was done we soon had her opened up – this is the bit when some people end up fainting or feeling unwell, but as this was the third one for us this year it didn’t seem that bad. So I helped the vet when she needed something passing or wanted something holding as no other vet came. I did enjoy it helping the vet, it was something different. When she asked my Dad to pull the calf out we then realised why it was never going to come out of the back end. It had small legs compared to its body which was enormous. It was good the fact I had got the heifer in calf but calving at this time of year isn’t a very good idea as the calves grow which results in difficult calving. We soon the heifer stitched back up, she did stand all the time and did well not get too upset as she had been tied up for over four hours. The calf had been dead for at least 24 hours. 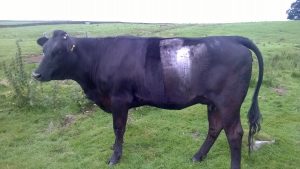 It was an expensive day with it costing over £300 for the caesarian and there is only the cow’s life to show for it. This heifer has been kept for two and half years to have a calf and now we have to decide whether to keep her another year and hope she has a calf or whether to sell her. It is most likely that she will be sold as it is too long to keep her without producing anything for us.