Well lambing has finally finished, with only the odd sheep left to lamb. We have had a busy week marking lambs and now we only have one flock, the moor sheep – both the twins and singles left to do. We seem to be getting on better this year with marking, as we have only been marking them for just over a week and now we’ve only a few left to do. The sun has finally come out, last week we had snow and this week the temperature is above 20 degrees celsius, so the stock both inside and out has had a shock. However this warmth has been needed for a while as very little grass has been growing over the last month. It is amazing how two days of dry weather makes it possible to drive all over a field, instead of having to dodge wet patches or even setting off down a hill as it has been very wet. It is also pleasing that the sheep no longer need silage as last weekend we used the all the silage up that we had and had to start buying some in until the cows can go outside. My dad says that it isn’t very good having to buy silage in, as you are buying something that may not have been as good as what we have been feeding the cows. If the cows’ diet changes they will not milk as well and the calves may stop doing any good. It is therefore important that you know what you are feeding your stock. As it usually takes a cow 3 weeks to adapt to a change in diet, you wouldn’t know immediately if the change was bad for the cow. 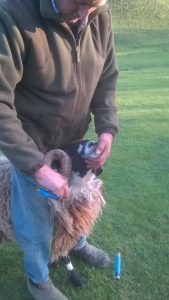 Tonight we have had to saw Tup horns. Sometimes the Tups’ horns grow into their faces where they curl round as they grow and push into their faces. Their horns grow when the Tup starts doing some good after winter. The horns can grow quickly as one day their horns may not be touching and the next day they sometimes have grown and are nearly touching their face. We cut the horns off using a piece of cheese wire. The knack of sawing the horns is to keep going; not stopping as if you stop it becomes harder to saw. Also if you stop sawing half way through it can make them bleed a lot. The faster they are sawn, there is less chance of blood. After they have been sawn off we spray some antiseptic spray on the cut horn to help it heal and keep flies away. Both myself and my Dad said that the Tup looked a better Tup without his horns, as they had grown in and were that tight to his face he didn’t look as good as he does now. All the Tups’ horns are to keep an eye on from now on and there will probably be some more to do soon. 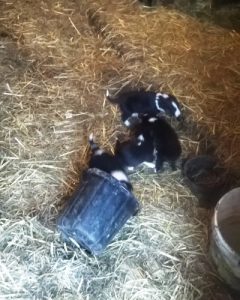 In addition to calves and lambs, we have some new additions on the farm: one of my Dad’s dogs –Tip – has had puppies. There are 5 in total, 2 bitches and 3 dogs. They are getting plenty of attention from everyone. My Dad and Grandad would like to keep one as one looks like Tip and one of the others looks like one of their old dogs Susie. Tip is desperate to get back to work, but she is a very good mother and knows if you have hold of one. I think she would know if any went missing, as now they are starting to explore all over the building and wanting to be out when you open the door. 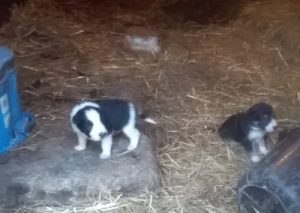