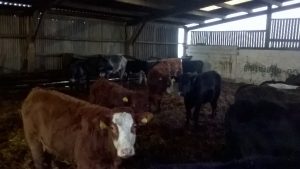 The day finally arrived, which we all dread, when the cows come inside after spending the summer outside. We have to bring them in as the land becomes too wet in the winter for them and they would make too much mess in the fields. Also the grass isn’t growing as fast so if they were left outside they would have to be fed, so it is easier to bring them in to feed them there. Normally my Dad and Grandad say that every day after the Nidderdale Show is a bonus if the cows are still out, as sometimes if it becomes too wet they have to come in earlier. I am starting to think that there is a bit of truth behind what they both think. 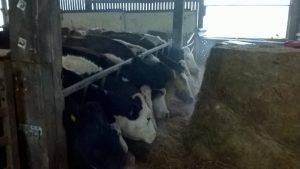 As we have two farms, the cows are split up between the two places. At my Dad’s, we have all the heifers that have been AI’d and some cows and calves. The cows and calves are all in loose buildings – meaning that they have straw as bedding. Whereas the heifers are in cubicles which have straw put in them, but we use less straw in cubicles which is better as straw is becoming harder to get and more of an expense. Both the cows and the heifers are fed on silage, which we made on the farm this summer. But they also do get some straw to eat if they want it. 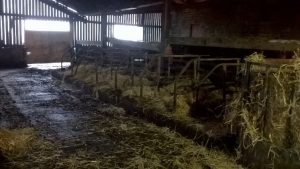 The calves that are still on the cows get some creep feed (cake), which helps the cows as the calves may take less milk. We also have done this so that when we can separate them, it may not have as big an effect on them and the cake will help to settle them. Sometimes when the calves get stressed they can get pneumonia especially if it is warm, so we try to wean them on a cool morning and when they are separated we put them into an airy shed.

Some of the cows that are too old or are not pregnant will have to be sold so this week we are going to have the vet Pd the cows (to see if the cow is pregnant) – if they are not in calf they will probably have to go to the auction, as it is a long time to keep cows if they aren’t producing anything (a cow is in calf for nine months). 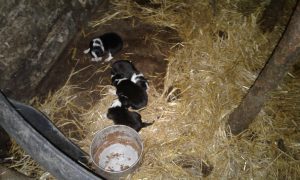 We also have some new additions here. Tip has had some more puppies and this time she has had four. She has had one bitch and three dogs and they are getting a lot of attention from everyone.