I know it was only 2 weeks ago since I wrote about scanning the heifers, but now their calves are due. This week we have sorted the ones out that are due to calve first, usually we can’t be certain when this will be. The gestation period can vary and is not always accurate. Some cows calve earlier than 9 months and 6 days and others can go over by a week or two. Usually those cows and heifers which start to bag up are sorted first as this is an indication that labour is near, though this method isn’t always reliable. This year, because we AI’d them we have an advantage as we know when they were served so also know when they are due. All the semen that we have used has statistics on how long the gestation period is and the calving ease which is something we look at when choosing the semen. 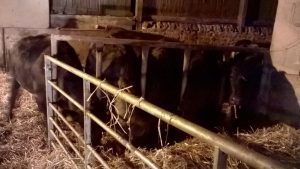 The heifers diet is restricted as if they have too much to eat it will just grow the calf, making the cows harder to calve. So the heifers have some silage and some straw to eat and are fed twice a day. We have sorted out 8 which are due before and over Christmas. The rest of them are on a restricted diet and once some have calved we will move the ones out of the shed that have calved and put some of the others that are due in.

I have also been busy feeding sheep since the grass is slowly stopping growing so there is more and more feeding to be done. The reason why there is more sheep to feed is because we only have one moor now that the sheep can remain on during the winter. One moor has been put into a stewardship scheme and so we have had to take the sheep off during the winter. We are paid for taking the sheep off the moor, and the reason is to allow vegetation such as heather and bilberry to grow and become established. Sheep target graze this in winter as it is sweeter than the grasses at this time of year. So it’s good for the moor but means more work for us on the farm, feeding all the animals.

We feed the sheep some cake at tupping time as it keeps them together and gets them together with the tup. However once we have finished tupping the sheep get fed fodder beet. They do well on this and normally we feed them this until the end of March. They also get some silage or hay, but they haven’t had any up to now as there is still a bit of grass to eat. We have some hillsides with rough grass on and some of the sheep go onto there after tupping, and are fed pot ale syrup, this is a by-product of whisky. The pot ale syrup makes them eat the rough grass. All the sheep are fed it and they do well on it.