Last weekend we took our sheep back to the moor. We have to walk them back even though it’s four miles away from the farm. It is easier to walk them than to take them in a trailer, as there would be too many to go in a trailer at once. But before we set off we have to separate out the stronger sheep. The weaker and younger ones have to stay at home because they aren’t strong enough yet to be on the moor. I did this the day before as it is easier to sort them out a day or two before as then they are not clashed about when the flock sets off to the moor. I sorted the sheep out by sheading the ones that I wanted off into another field, so that the weaker ones were left behind. I used Susie and Fly to help sort them out. In total I sorted 109 ewes out, which were ready to go to the moor the next day. These were mostly ewes with single lambs. The weaker ones will be able to go to the moor when they are stronger so the moor sheep with twins will go back to the moor after clipping because then there will be sufficient grass/bent for the sheep to eat on the moor.

It was warm when we took the sheep back, so they were fairly steady and some of the lambs were struggling. I walked in front to clear the way so that we didn’t get mixed up with other sheep, I took Fly and my Dad was following behind the sheep with Susie and his dog Bob that is still getting trained. Bob did well, he soon realised what we wanted him to do. All the sheep made it and they all did very well. But once we got to the moor, you can’t just leave them and we had to check that they all mothered up as some may walk off and leave their lambs behind as they aren’t used to mothering up there. They were very difficult to mother up because the sheep were after the fresh grass so it took some doing but we eventually got them done. My Grandad came and picked us up as he was also doing some shepherding work. My Dad and Grandad say that the sheep are stopping up on the moor well – the knack is to keep at them for a week, so that they learn to stay up there. The sheep are hefted so the ewes know where to go but the hoggs sometimes decide that they want to be somewhere else. That’s why it is important to take the ewes with their lambs to the moor as the lambs normally go back to where they sucked their mothers, this is what makes a hefted flock. 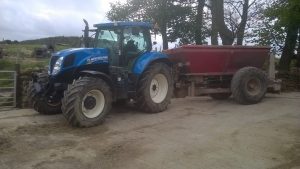 This week we have also started getting the machinery ready for silaging. All the machinery has to be serviced and checked that it is ready for work. The tractors have their oil changed and are greased up ready. Also all the other machinery has its oil changed if it needs it and is greased and oiled up. It is important to keep them serviced as it hopefully prevents breakdowns. Normally we would have started silaging by now, but it has been too cold for grass to grow, meaning that we are ten days later than normal. The fact that we are later makes it slightly easier for us as we can get finished sorting the sheep out and have managed to get them back to the moor, whereas under normal circumstances we are trying to do this whilst we are silaging.